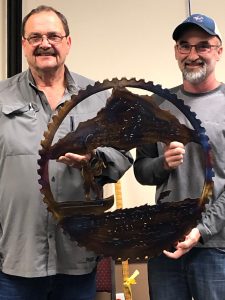 Inman replaces Russ Hogan, the retiring executive director who has worked for IBSP for 26 years. Hogan’s last day is November 15.

What is the Idaho Board of Scaling Practices? It is an independent state agency attached to the Idaho Department of Lands for administrative purposes. The primary purpose of the Board is to enforce log scaling standards prescribed by statute and regulations.

Why is it important? Determining fair log value is important for the state of Idaho, and particularly to forestland owners. The board enforces log scaling standards prescribed by law, and tests and licenses scaling practitioners. Scaling is also crucial to the Idaho Department of Lands, which generates revenue from endowment lands through timber sales. Timber revenue and fair log scaling helps fund Idaho schools and other state agencies.

Also at Friday’s meeting, Alan Harper was sworn in as a member of the Idaho Board of Scaling Practices. Harper was reappointed to his second three-year term on the board by Governor Brad Little. Harper represents manufacturers utilizing more than 100 million board feet of logs per year.