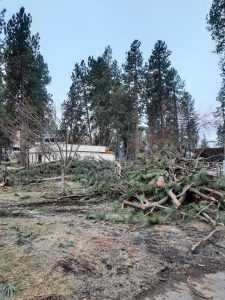 Idaho Department of Lands (IDL) forest health officials want forest landowners to know that trees uprooted or broken during storms can become infested by bark beetles as the weather warms. The beetles can build up populations in fresh, damaged logs and then attack and kill neighboring healthy trees. However, taking certain steps can minimize the damage.

The risk of bark beetle attack and the recommended management actions differ depending on which tree species has been damaged. The size of damaged trees also impacts their susceptibility to bark beetles. Dead trees are not at risk for infestation, only green trees and logs damaged within the past winter are cause for concern.

Engelmann spruce can be infested by spruce beetle, especially if logs are large-diameter. Spruce beetles take one or more years to develop, depending on temperature, before emerging to attack additional standing spruce trees. Spruce beetles can attack ornamental species like Norway or blue spruce, but these are infrequent hosts.

These bark beetle species are highly attracted to the moist tissue under the bark of wind-thrown trees, broken tops, and logs. 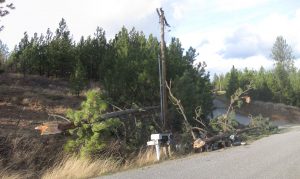 The best option to reduce beetle infestations is to remove damaged trees. If there are not enough trees to economically salvage, consider safely burning or chipping, or removing branches and cutting green logs into smaller pieces. If chipping in spring, do not pile chips near the base of standing trees since their odors can be attractive to bark beetles for a short period of time. Spread chips out in the sun, or chip in late summer or fall if possible.

Forest owners can hasten the drying of logs and green wood by spreading them in a sunny area before beetles fly in the spring. Leaving damaged trees or decks of green logs in shady areas increases the chances that they will be infested. DO NOT stack green firewood next to live standing trees. The idea is to reduce the number of places for the damaging beetles to breed and then kill live trees.

In pines, quick action is necessary since beetles can emerge from damaged pine materials as early as June, 2021. Large-diameter logs of Douglas-fir, western larch, and spruce will not pose a threat until spring, 2022. These logs can be bucked and split this spring or summer and left to dry out and kill any developing beetles before they emerge next spring. Infested materials can also be removed, chipped, or burned during the winter of 2021-2022. 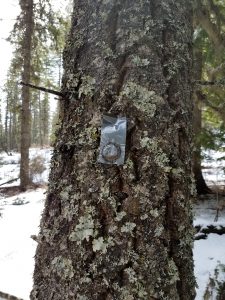 Pheromone repellent pouches called MCH are an additional tool to ward off Douglas-fir beetle. These pouches can be stapled to susceptible down logs in April, 2021, and will prevent infestation by Douglas-fir beetle by tricking beetles into thinking the logs have already been fully attacked. If down logs cannot be treated this April and become infested, surrounding stands can be protected with MCH applied to nearby standing trees in April, 2022. MCH is very effective at protecting Douglas-fir trees, but it will not work to protect pines and has limited effectiveness in protecting spruce. For additional information about using pheromones, please contact the IDL forest health team at (208) 769-1525.

What are bark beetles? Bark beetles are a group of insects that spend almost their entire life beneath the bark of trees. They tunnel in the moist inner bark, lay eggs and these develop into larvae or grubs. The tunneling kills trees by girdling them (cuts off the supply of nutrients). Adults emerge later to infest other trees in late spring or early summer. For more information, please see the IDL bark beetle fact sheet.

Certain bark beetles can reproduce in green logs, uprooted trees and green firewood if the inner bark is moist in April and May.

Bark beetles are cold blooded, so they will develop faster during warm weather. Drought and hot, dry summers are stressful for trees and increase the success of bark beetles.

What species cause the most problems?

Pine engraver prefers damaged ponderosa and lodgepole pine trees and slash. It has multiple generations per year. Pine engraver overwinters as an adult, and flies early in the spring as temperatures warm. It infests green pine logs > 3” diameter in April and May and lays eggs. These eggs develop into adults approximately 6 weeks later. The emerging adults will infest more down material if it is available; if none is available they will attack standing trees in July. Normally, the eggs laid in these standing trees develop into adults that overwinter. Dead trees can occur in summer, 2021. For more information, please see the IDL pine engraver fact sheet.

Douglas-fir beetle can infest damaged Douglas-fir or down western larch. This species has one generation per year. It overwinters as an adult, and flies early in the spring and prefers green, down material. Beetles tunnel in the bark, lay eggs and one generation of larvae develop in the logs or down trees. Adults then overwinter under the bark or in the forest litter. Dead trees can occur in 2022. For more information, please see the IDL Douglas-fir beetle fact sheet.

Spruce beetle can attack damaged spruce and takes one or two years to develop in infested logs, depending on temperature. Spruce beetle outbreaks can be very severe if many host trees are present. Dead trees can occur in 2022, but needles on fatally-attacked trees may remain green for longer.

What is the best way to avoid problems? The best course of action is to NOT have down, green material available in spring when the bark beetles emerge. If logs become infested, remove or destroy them before beetles can emerge.

Forest Landowners: If there are enough damaged trees to economically salvage, that is the best option.

What if I am a landowner in an urban or suburban area? Some counties or municipalities will accept woody material at transfer stations or landfills. The material is often chipped to be used for other purposes such as mulch or industrial fuel.

If you can’t remove the damaged trees or slash, try to make them unsuitable for bark beetle reproduction. If salvage is not practical, damaged trees can be safely burned if allowed, debarked or chipped. Planer chainsaw attachments, such as the LogWizard, can be effective tools for bark removal.  If this is not practical, broken tops or uprooted trees can be cut into smaller pieces and the limbs removed. Placing them in sunny areas will assist the drying process. The idea is to help the logs to dry out as quickly as possible.

Can I save the wood for use as firewood? If the species is not pine, firewood cut into 16” pieces and split may be infested by beetles this spring, but it is unlikely that any beetles will emerge in 2022. This is not the best option for pine because beetles will infest the wood and emerge around June, 2021. Never stack green firewood next to live standing trees. This is inviting bark beetles to kill the standing trees when they emerge.

Decks of green logs stored through the winter are very likely to become infested in the spring if the inner bark is still moist. Snow cover and shade will increase the drying time.