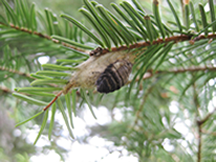 Idaho Department of Lands (IDL) is working to manage a major Douglas-fir tussock moth infestation in the Packer John State Forest. In an effort to contain the outbreak, reduce fire risk and safety concerns to the recreating public, and capture some value for the timber, IDL plans salvage timber harvests in the most impacted areas.

It is not unusual to have a tussock moth outbreak every ten years or so, and often times trees can recover. However, this infestation combined with several years of western spruce budworm defoliation and drought conditions in 2018, has resulted in extensive mortality. Making matters worse, bark beetles, ambrosia beetles and fir engravers are moving in to further attack weakened trees.

The trees still have economic value that can be salvaged. However, that value will rapidly decrease if bark beetles and wood borers infest the dead trees, or if the wood dries and cracks due to delayed salvage harvests. The land is owned by the public school endowment, with money from the salvage supporting reforestation of the affected areas and revenue for public schools. 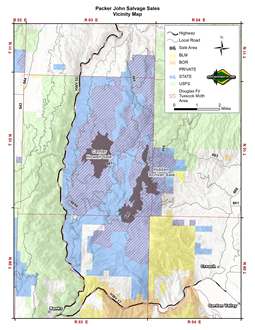 All trees within the salvage sale areas will be harvested except for ponderosa pine and spruce trees which are not affected by tussock moth. Those species make up a small percentage of trees within the harvest areas.

Following salvage operations, the land will be treated with herbicide to control brush and weeds and will be replanted with a variety of tree species (ponderosa pine, lodgepole pine, Engelmann spruce and western larch) to make it less susceptible to this type of damage in the future.

FAQs about the Douglas-fir tussock moth